On Friday I looked ahead to 2016, but today I’d like to look back at 2015 and talk about my favorite books from the year. I’ve reviewed all but the last on this list, so if you read my blog all year, you’ve probably heard of some of these. These are my favorite of the books that I read in 2015. Some of them were released last year, but not all of them were, so I split this post up into two sections, starting with those that came out in 2015. The books are listed in the order that I read them.

1 // A COLD LEGACY by Megan Shepherd is the final book in the Madman’s Daughter trilogy, and is about Juliet, who discovers that her scientist father was forced to flee England because of the experiments he was performing.

This is a creepy series and it has instances that are a little disturbing, but I loved the series and thought that each book flowed nicely to the next. This was my most anticipated release of 2015 and it did not disappoint.

2 // FIRST THERE WAS FOREVER by Juliana Romano follows Lima, as her best friend starts to pull away from her and the new friendships she forms, one of which could cause problems when Hailey starts to reach out to Lima again.

This was on my TBR for 2015 so I was excited when the publisher sent me copy to read and review. When I read this, I didn’t think it would end up on my list of fave books of the year–even though I enjoyed it–but this story stayed on my mind throughout the year. There’s a lot that happens in this book and I think you could take away different from things from it. I saw this as a story about best friends and what happens when that friendship starts to disintegrate. I’ve had that experience in my life and it’s something that I haven’t seen in fiction. I’m sure it’s out there, but I was happy to see it in this book. It felt very real to me. (You can also read my Q&A with Romano.)

3 // FINDING JAKE by Bryan Reardon is another that I received for review (and I even featured a Q&A with Reardon). This novel is about a stay-at-home-dad who experiences one of his worst nightmares when there are reports of a shooting at his children’s school. After all of the parents have received word about the fate of their children, Simon is still waiting and he discovers that his son Jake is missing and is thought to have been responsible for the shooting.

This was also on my TBR for 2015 so I was excited to have a chance to read the book and ask the author a few questions! A school shooting is a topic that I tend to stay away from in fiction, but the synopsis of this one really caught my attention. I knew it would be a hard read, but I also thought it would be one worth reading, and it was. I loved that this was told from the point-of-view of a dad who stays home with his children and I appreciated that there was a question of whether Jake was or was not involved in the shooting. The writing was beautiful and this book has really lingered in my mind. My mom read this once I was done and it must have lingered with her too, because she brought it up in conversation the other day.

4 // THE WONDER OF ALL THINGS by Jason Mott is about a young girl who can heal people, but when she heals, it comes at the cost of her own health. When her ability is discovered, people flock to her town to have her heal their loved ones, and friends in her small town question why her family didn’t talk about her ability in time to save some of their family members.

I also received a copy of this for review and I’m so glad I had the chance to read it. Once I started, I couldn’t put it down. This book really grabbed my emotions and I found that I had strong opinions about what was taking place. I read it in a day and later, while on a road trip with a friend, I talked about the book and it created a really fascinating discussion. I highly recommend this one, especially if you’re part of a book club. It will create a great discussion! (I even have some discussion questions in my review.)

5 // THE GIRL YOU LEFT BEHIND by Jojo Moyes alternates between a small town in France during WWI and present day in the U.S. In France, a German soldier becomes enamored with a portrait of a hotel owner painted by her husband before he left for war. In the U.S., a young widow holds onto the apartment her husband left behind and a portrait that he bought for her while vacationing in Europe.

I listened to this one on audiobook and wasn’t too sure what I thought of it at the start, but by the end I really enjoyed it. It’s also a book that has stuck with me throughout the year and I’ve thought about it quite a bit since I read it… which was in January. I liked the main characters. I had trouble relating to them, but I really cared about them and was invested in what happened to them. I love stories about lost and stolen art and I’ve read stories about art stolen during WWII, so having the focus be on WWI was different and a unique perspective.

6 // IN THE SHADOW OF THE BLACKBIRDS by Cat Winters takes place in 1918, at a chaotic time for the U.S. Young men were shipped off to war, the flu epidemic was sweeping the nation, and people were reaching out to spirit photographers as a way to connect with loved ones who had passed. Mary Shelley Black never believed in ghosts, but when strange things start to happen and it appears as though her only love who died in war is reaching out to her, she must rethink what she believes to be true.

I was intrigued to read this book not only because of the premise, but because Winters included actual photography from that time period (including examples of the supposed spirit photography) in the book. I love novels that incorporate things like that into the text. I listened to an interview with Winters in which she discussed how much research went into this book and all of it paid off. She brought this time period to life so vividly that I felt the paranoia of the flu and the war and all that was taking place. It took me awhile to get through this book because of all that there was to take in, but even so I read most of it one sitting.

7 // SNOW WHITE MUST DIE by Nele Neuhaus takes place in Germany and is about a small town that was rocked years earlier when two young women disappeared. One of their classmates was accused of murder and sent to prison. The novel starts when he’s released and returns to the town, which immediately puts everyone on edge. When a young girl who bears a striking resemblance to one of the victims goes missing, it appears as though history is repeating itself.

I had to include this book not only because I thought it was one of the best mysteries that I read in 2015, but because it’s also the book that literally followed me throughout the year. I bought it in January or February, started reading it in March, kept picking it up throughout the year and finally finished it in December. Every time I picked it up I’d have to set it down for a review book or a book club read, but I’m so glad I had the chance to finish it because it was really good. I didn’t know what was going to happen or who was involved, so I was turning pages (whenever I was reading it) until the end. I will definitely read more by Neuhaus and hope to pick up another book by her in the next month or two. Also, the cover is stunning (and is what drew me to the book in the first place).

And that’s it! My favorite reads from 2015. I didn’t expect to have so many books that I received for review in my list of favorites, but it’s cool to see that so many of them really stood out to me.

WHAT WERE YOUR FAVORITE BOOKS FROM 2015?

[Tweet “Looking for a book to read? Check out these faves from 2015! #amreading”] 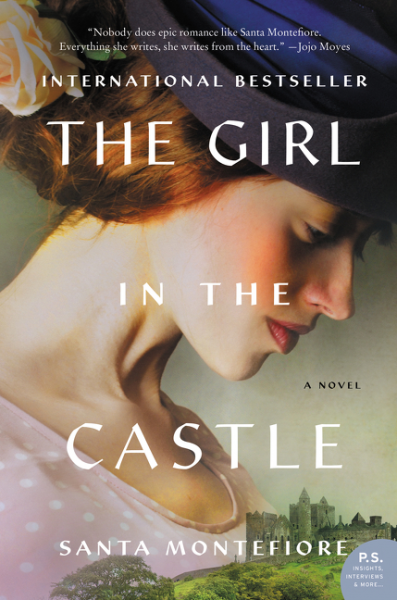 Book Tour // The Girl in the Castle by Santa Montefiore

Vote for a Book for October