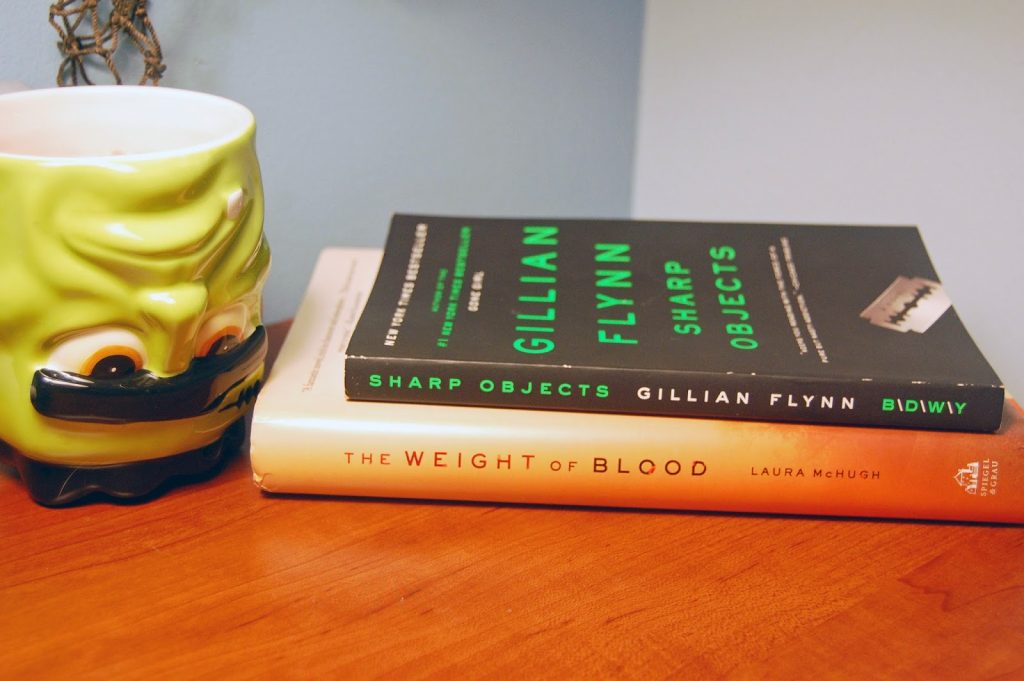 The first two books that came to mind when it was time to write this post were my two most recent reads, although I know I read other great books this month as well.

SHARP OBJECTS, BY GILLIAN FLYNN
This novel is about Camille, a reporter who returns to her hometown to investigate the deaths of two girls. While there, she stays with her mother, with whom she has a tense relationship. Am I allowed to say that I liked one of Gillian Flynn’s books better than Gone Girl? Because out of the two books of hers that I’ve read, this one is definitely my favorite. I thought the mystery in Gone Girl was more timely, but the one in Sharp Objects and how it all played out is more of what I look for in a mystery. I really liked the main character in this book. I don’t know if everyone will, but she’s the type of complicated character that I really like to read about. I figured out the mystery early on, but this is still a creepy and unsettling read.

THE WEIGHT OF BLOOD, BY LAURA MCHUGH
After the body of an old friend is found, Lucy, a local girl in town and the daughter of the woman once seen as the town witch before her disappearance years earlier, starts to investigate the murder. I have a hard time saying that I “liked” this novel, or “enjoyed” it, because it’s disturbing, but I really did enjoy it. I think this is a good novel for people who like stories with a mystery, but don’t necessarily want to read a book that is all about the mystery. While that’s a large part of the story and something that runs throughout the novel, I thought that, especially at the beginning, this was the story of the characters. The chapters go back and forth between Lucy in the present and her mother Lila in the past and I really enjoyed this look into their lives. The writing was so beautiful and I really enjoyed soaking up the words. I thought the mystery was different than a lot of what I’ve read before, so I really enjoyed that uniqueness, too. I didn’t think that this book was creepy at all, but it left me more unsettled than Sharp Objects. {I won this book in a giveaway from Memoirs of a Pilgrim. You can read Jamie’s thoughts here.

Both books really made think and have also stayed with me since I turned the final page, and I always appreciate it when books do that. I was ready for a lighter read after these, though, so I’ll be taking a break from the mysteries filling my Fall TBR to read something a little more carefree for my next book.

WHAT WAS YOUR FAVORITE BOOK FROM OCTOBER?