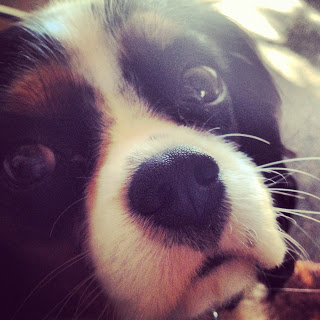 I have news and it’s heart-jumping!

(More on “heart-jumping” at the end of this post.)

I had certain criteria. I wanted a male dog and I was specifically looking for a Miniature Dachshund or a Cavalier King Charles Spaniel. And then, while meeting a few Cavs, I met the sweetest little girl. When I met her I knew that she would be a wonderful pet and last Wednesday I brought her home!

This is my puppy! She seriously is the sweetest dog and she’s been a hit with everyone who has met her so far! She was really nervous at first but that first day she started exploring her new turf and has been settling in quite well. She loves to play her with toy dragon in the house, stare at squirrels through the window and carry sticks around the yard each time that I take her out. This girl always has a stick in her mouth as we walk around the yard and there is a growing collection of sticks that I have taken away from her by the door. If you need help clearing your hard of sticks this fall, I have the lady for you!
On this blog, I have a tendency to give the dogs in my life nicknames, as seen with the Canine Nephews and The Dog. (I know what you’re saying, but I didn’t say that I give them good nicknames…just that I give them nicknames.) My little girl was exactly eleven months old when she came home and since she’s still a puppy I’ve decided that on this blog she shall be known as Le Chiot.  Yep, you guessed it!  It’s The Puppy in French.
So…heart-jumping. When I officially heard that Le Chiot was mine I told my dad, who was with me when I first met her. He said that his “heart jumped” at the news. I interpreted that as excitement and started telling people that he was excited about the dog. But when I told him that I was telling people that he was excited, he told me that I should be more accurate and tell them that his heart jumped. And from that point on, getting Le Chiot became a heart-jumping event.