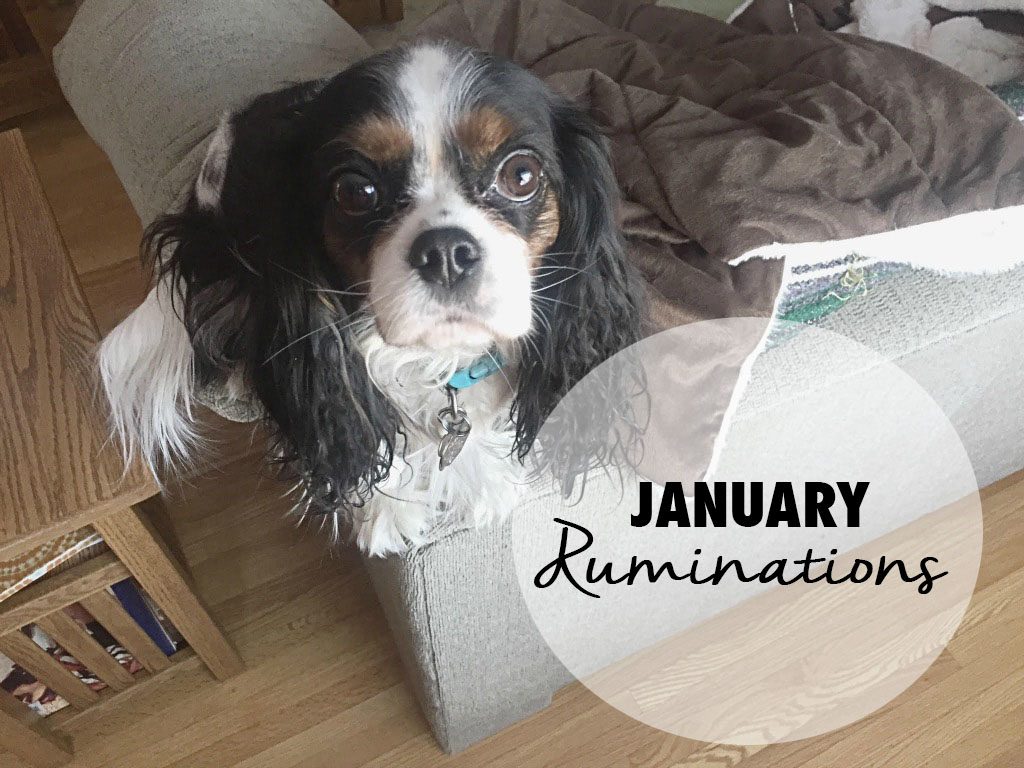 January was an eventful month. We said goodbye to my sister’s dog Wolf and I was focused on Little One’s recovery from an injury. My mind was also on a couple of projects from work, but I still unplugged more than I did most of last year. A friend and I started making some plans for the year–creative endeavors and things we want to do.

Through it all, I didn’t get any work done on my own creative projects. And that’s okay.

I decided that January would be a month for me to think through my writing projects. I wanted a list of projects that I’d like to work on and I wanted to write down some of the details related to each of these that have been on my mind. I haven’t done that yet, although it’s still on my to-do list. (Saturday, I’m looking at you!) But I’ve been in the fiction writing mentality more this month than I have been for awhile and I’ve been letting my mind do its thing. I’ve been so focused on being in control and directing all of my fiction writing-related thoughts for quite some time and it wasn’t working. I need serendipity in my writing life and in trying to have so much control I was cutting that out.

I’ve also been listening to a podcast of interviews with YA authors throughout the entire month. It has been so inspiring and motivating to listen to some authors that I really like talk about their life/writing (along with some authors whose books I haven’t read).

As I’ve been listening to the advice these authors have given and as I’ve relinquished the control I’ve been holding onto, one novel idea has been coming to mind. I’ve been thinking through some of the scenes that I’ve had in mind and getting to know the characters again, so that’s the one I’ll be working on starting… now! (My mom was happy when I told her… she’s been telling me to finish this one for awhile.) I’m really excited to get back into this story!

Hopefully February will be another month of learning to let go of that control as I work on this novel.

Most Popular Posts on Dreams, etc.

These are my favorite of the books that I read in 2015. Some of them were released last year, but not all of them were, so I split this post up into two sections, starting with those that came out in 2015. The books are listed in the order that I read them.

Fifteen years ago I met you for the first time. You were just a tiny puppy and I held you in the palm of my hand. You were so quiet and still that I hoped you were still breathing (you were!) and I hoped you would be the dog they would take home. I was so happy when you were! Somehow, I expected you to remember me a couple months later when they brought you home. You didn’t, but I don’t think it took long for the two of us to become buds.

At the start of each year I look through lists of YA novels that will be released and make my own list of books to look out for. I mostly write YA, so I like to have an idea of what’s coming out. It’s also nice to have a list to consult each month so that I don’t miss out on my most anticipated reads for the year

>> On Cultivating a Night Routine

Each night I’d log off the computer and spend the rest of the night giving her tummy rubs while reading or watching TV until we both fell asleep.

Posts Around the Web

>> Love this post from Chelsea at truelane about Goals Adrift.

>> Are You Ready from Chelsea at The Girl Who Loved to Write made me tear up.

>> Hannah from Just Bee offered some great tips with 6 Things You Can Do to Satisfy the Travel Bug.

>> Why Taking Time to Reflect Matters from Summer at Coffee With Summer struck a chord with me this month.

WHAT HAVE YOU THINKING ABOUT IN JANUARY?