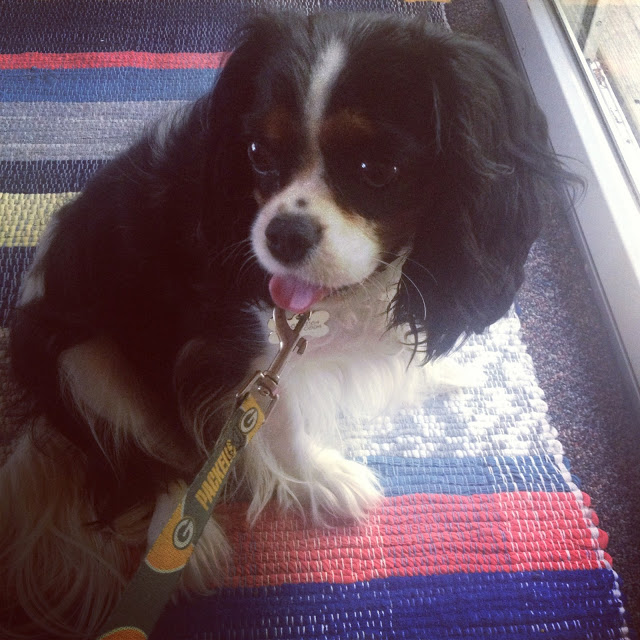 My writer took me to her brother’s cabin this weekend to hang out with her family. She’s a strange one when she’s getting ready to go someplace. She takes her stuff and my stuff out to the car and then keeps moving around the house. And it’s almost like she actually thinks that while she’s doing that I’ll leave the door. Yeah right! Like I’m going to risk being left behind!

Of course, once I got to the cabin I was wondering if it would have been better to have been left behind. There were a lot of people. And dogs.

That’s right. There were a lot of dogs. Wolf was there… the little runt of a dog that my writer calls my BFF but I’m not so sure about that… he’s kind of a grumpy little guy. And then there were two big dogs! One of them was a little nervous to see me too, but the other wouldn’t leave me alone! I slid into a wall while she was sniffing me!

They got better though. They spent a lot of time outside and my writer tried to keep me inside as much as possible. She said that if I was out in the grass I’d get ticks, and I must have had some because she spent a lot of time brushing my fur to look for them and every once in awhile she’d call someone over to pick one off. When she did let me out in the grass, there were so many new smells to take in! It was glorious! I’m used to squirrels and bunnies and deer and foxes but there were so many new smells! My writer’s family kept talking about a bear that had been in the area earlier; maybe that was one of the smells. I’ve never seen a bear before. What are they like?

She let me spend time on the deck though. Unfortunately, the other dogs were usually there too. The one that slid me into a wall took over my bed! Can you believe it? I mean, it’s not like I was going to curl up in it since it was always in the sun and I wanted the shade, but still. She doesn’t even fit into it! Look!

The cool thing about the weekend was that I got to meet two of my writer’s family members who I haven’t met before. At first I wasn’t so sure about them; they brought the big dogs. But they really liked me, especially one of them. He kept telling me that I’m pretty.

I had a lot of fun, but with all of the people and dogs around I didn’t have as much nap time as usual. I’m pooped! BRB – I need to go sleep for a week to make up for it.

Until next time, keep that tail waggin’!