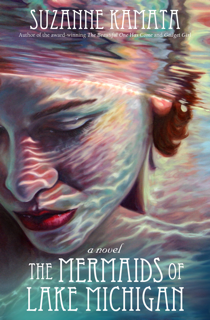 Note – I received a copy of this book from the publisher through TLC Book Tours in exchange for an honest review. All thoughts and opinions are my own. No affiliate links were used in this post.

It’s been awhile since I’ve had a guest post from an author on my blog, so I’m so excited to be able to share some thoughts by Suzanne Kamata, author of The Mermaids of Lake Michigan. I signed up for the book tour as soon as I read the title. Anything that talks about mermaids will catch my attention… but lake mermaids? It was made for me! For those who don’t know, a friend and I have a group and a dream called Secret Life of Mermaids. We’ve had to put this on hold for the time being, but it’s something we both love. It’s first name was actually Minnesota Mermaids, because we thought, “Why do mermaids only live in oceans?” We live in the land of 10,000 lakes, there’s gotta be a mermaid or two swimming around in this state!

Head on over to Goodreads to read the official synopsis of the book!

Reading The Mermaids of Lake Michigan was like reading a fairy tale–not a dark Grimm’s fairy tale, but not a Disney-fied fairy tale either. It was life with a mystical touch. I loved the dreamlike nature of this novel. Sometimes it felt like were flitting in and out of moments of Elise’s life. At times I wanted more, but it always felt like we saw exactly what we needed to see. I loved the Moulin Rouge-vibes to the narrative as well… it took me awhile to figure out what the narrative reminded me of and then a line brought Moulin Rouge to  mind and I thought, “Yes! That’s it!” This is a shorter book, one that you can read in an evening, which is how I read a majority of it.

[Tweet “THE MERMAIDS OF LAKE MICHIGAN is a dreamy fairy tale with Moulin Rouge vibes!”]

I asked Kamata about the inspiration behind all of the different mermaid threads that I read about in the description of the book (I hadn’t read the book at this point) and I loved reading what she wrote. A big thank you to Suzanne for sharing this with us!

[Tweet “Suzanne Kamata shares some of the mermaid inspiration for her novel THE MERMAIDS OF LAKE MICHIGAN!”]

I grew up in Grand Haven, a small town on the shores of Lake Michigan, which is the setting of my novel, The Mermaids of Lake Michigan. When I was a teenager, I thought the Midwest had to be the most boring part of America, and I couldn’t wait to get away. I had plans to go to New York City, or maybe to travel the world gathering exotic experiences, and then to become a writer. I did leave. When I was sixteen, my family moved to South Carolina due to my dad’s job, and later, I went to Europe on foreign study, and to Japan, to teach English. It was only then, a few years after I’d left, that I truly began to appreciate the magic of the place where I was born and raised. Grand Haven was the home of the world’s largest musical fountain as well as a beauty queen (Miss Coast Guard U.S.A.), and an annual festival that attracted visitors from all over.

The lake that is central to the story and appears on the cover of the book is like an inland sea – so wide and vast, that one cannot see to the other side. As a child, I often tried to imagine what was on other shore. And what, I wondered, was way down at the bottom? Pirate booty? Our own Lochness monster? It was easy to imagine that there might be mythical creatures in those depths – even mermaids.

Awhile back, I wrote a story called “The Diver,” which was inspired by Francis , a real-life wreck diver on the Great Lakes. According to an article that was published in a 19th century ladies’ magazine, on her first dive, she dove into a sunken ship to retrieve a diamond ring. On another dive, her oxygen was temporarily cut off when someone tripped over the onboard. In my version of the story, she is helped by a mermaid, who may, or may not have been illusion conjured by an oxygen-deprived brain. I liked the idea of a female wreck diver so much that I decided to weave one into my novel.

I was later interested to discover that mermaids appear in folklore all over the world. In Japan, where I live now, it is said that eating mermaid flesh will lead to immortality. I learned about Ghana’s mami-wata from a fellow expat writer. Other cultures have stories about mermaids as well.

I’ll leave it to the reader to decide if the mermaids of Lake Michigan are real or not.

Again, a big thank you to Suzanne Kamata for taking the time to share some of the inspiration behind her novel. If you’re interested in reading The Mermaids of Lake Michigan you can check it out in the following places.

What do you think? Could there be mermaids in Lake Michigan?