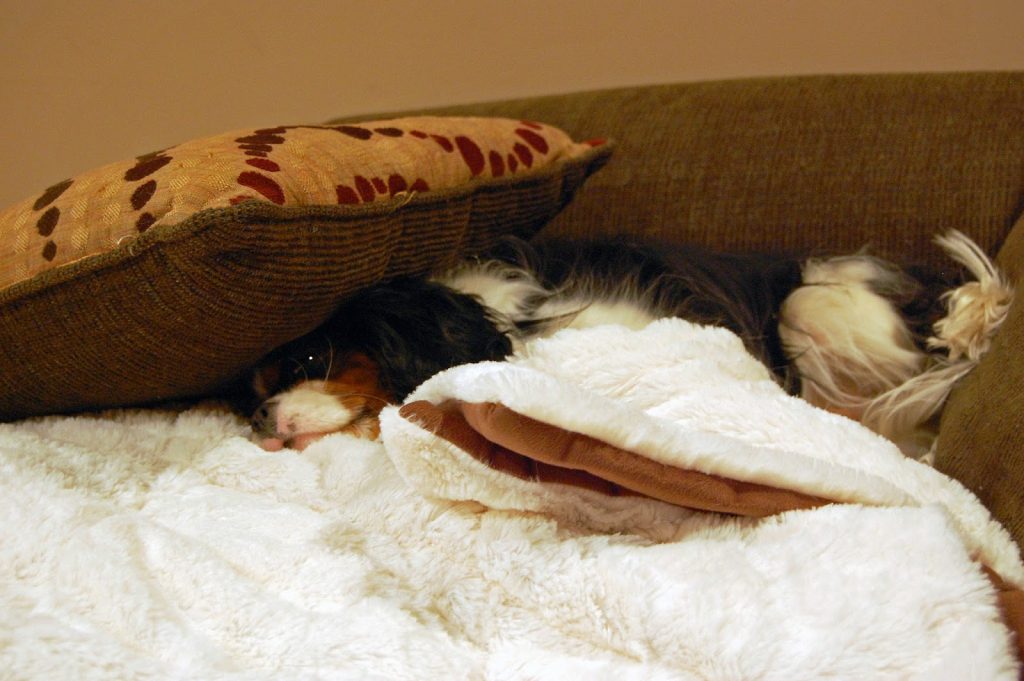 As I was going through the pictures for this post I realized that I’ve stopped trying to avoid taking pictures of Little One. She’s just too adorable! I hope you don’t mind. There are a few iPhone photos in the mix too.

16. She made herself comfortable and then stuck her head under that pillow. I’ve never liked those pillows–they came with the couch and I’d like to replace them–but I have noticed that dogs love laying under them. My sister’s dog did too.

17. I was on the couch. She was on top of the couch like a cat. It’s one of her favorite places.

18. My friend and I went to a coffee and wine bar after church on Good Friday. The place was packed but we were able to grab a table shortly after we got there. A couple came in and asked if they could use half of our table. Of course we said yes and didn’t think anything of it. We separated the two tables and hung out for awhile. After they left the waiter came over with this plate of strawberries. The couple bought them for us as a thank you before they left. It was really sweet and totally made our night!

19. My niece and nephew were over so we spent the day coloring Easter eggs.

20. I’ve always liked taking pictures of a subject through a mirror. Here’s Little One.

21. She spent the weekend with her BFF-who-doesn’t-know-it-yet so even if she wasn’t chewing on a bone, she kept it close.

22. I received a postcard from Erika and I loved it.

24. Good news! So far I’ve managed to keep the plants alive. I think that’s a new record for me. Also, I think that thing sticking out of the plant with the water droplets on the… succulent leaves (?)… is new! I don’t remember seeing it when I bought it.

25. If you look at her, she will ask for a tummy rub. She actually lies in wait and watches you. Every time you look like you might turn in her direction she starts rolling over. It’s a Cav thing.

26. My BFF saw a picture that I posted on Instagram of a barre workout that I bought and she stopped by to give me a barre that hasn’t been used much at her house. Right now it’s keeping Little One out of the room with the closed door, but I’m looking forward to setting it up and using it!

27. The last time I did Project 365 I took a picture of my night table every month on the same day to see what was on it. I didn’t touch it before I took the picture, even if it was cluttered. I liked seeing what was hanging out there so I thought I’d start it doing it again. The fabric is some of the fabric that I nearly died trying to get while in Senegal. (Okay, so I didn’t nearly die, but I wondered if I would.) And yes, that is an old alarm clock back there. I set that alarm and two on my phone in order to wake up on time (or close to it) in the morning.

29. When she hears dinner being prepared she goes to the dining room table.

30. My friend Heather and I met for lunch.