Happy Monday, everyone! I hope that you all had a fantastic weekend! I thought I’d do a quick Things I’m Loving post, but I don’t have any pictures to go along it as I spent the weekend cleaning and didn’t have as much time to prepare for it like I thought I would. So that this post isn’t entirely picture-less, I thought I’d share this picture of Little One with you, snapped with my phone today. A big dog was wandering the neighborhood this afternoon and it actually dared to step into our yard and walk up to the house. And, to top it all off, it didn’t even heed the warning of Little One’s barks and leave the yard in a hurry, so once it finally left she was on the lookout for another intruder. Every once in awhile I’d hear a little, “Woof” and I’d look out the window and see… absolutely nothing. But she was ready, in case anyone or anything did step foot into the yard. 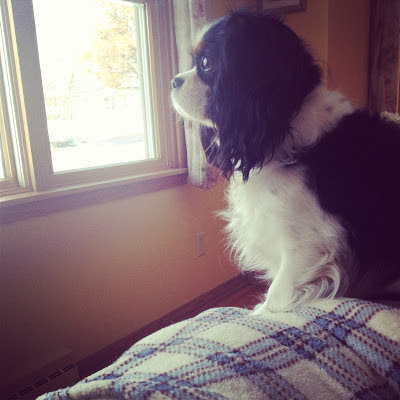 The OC and Once Upon a Time

I didn’t watch The OC until it was already in its final season on TV and a coworker handed me the first two seasons and told me that I must watch them when she discovered that I didn’t. I didn’t think that it would be my type of show but that coworker proved me wrong and I made it through the first two seasons in record time. Now I own all four seasons and I realized that I haven’t watched them for awhile so I pulled them out and started watching season one.  However, my marathon was interrupted by Once Upon a Time. Last year I was obsessed with the show. Obsessed! And when it was time for season two to start I was really excited. But once I actually started watching it, it didn’t appeal to me quite as much as it did last season. This lasted for awhile until I had quite a few episodes saved on my DVR. Finally I decided that I was going to watch one more episode and if that didn’t interest me I was just going to delete the season. I’m sure you know how this story is going to end. After that one episode I was hooked and I spent last week getting caught up.

I’m sure this doesn’t come as much of a surprise that I absolutely dogs. And this month has a great month in dog-land! Little One has been as cute as ever and my best friend got a little chihuahua puppy so we talked about dogs as she prepared for Louis’s arrival and since then I’ve been checking in for regular updates on the little guy. Little One and I have plans to go meet him this weekend and I’m excited! She’s excited to meet her new best friend too, she just doesn’t know it yet. 😉

I think I love Zumba more and more each time that I do it. My favorite DVDs have been Mix, which is a combination of different world dances, and Exhilarate. In addition to Zumba, I’ve been doing the Bollywood Boogie workout by Hemalayaa. I have done other Hemlayaa workout DVDs in the past and haven’t enjoyed them quite as much as I love this one, so while I watched the trailer for it countless times I never picked it up. Finally I decided that I just had to try it and I’m so glad that I did! Between Zumba and the Bollywood DVD, I have never smiled and laughed so much while working out.

In other news, I had a bad cold the last two weeks, which is why I wasn’t around much. By the time that I got home from work I was usually pretty tired and just crashed. Since I have been sick twice so far this year, I started drinking a vitamin supplement. It tastes like mangoes and is delicious! I’ve talked to people who swear that drinking these types of things helps keep them healthy, so I’m giving it a shot!