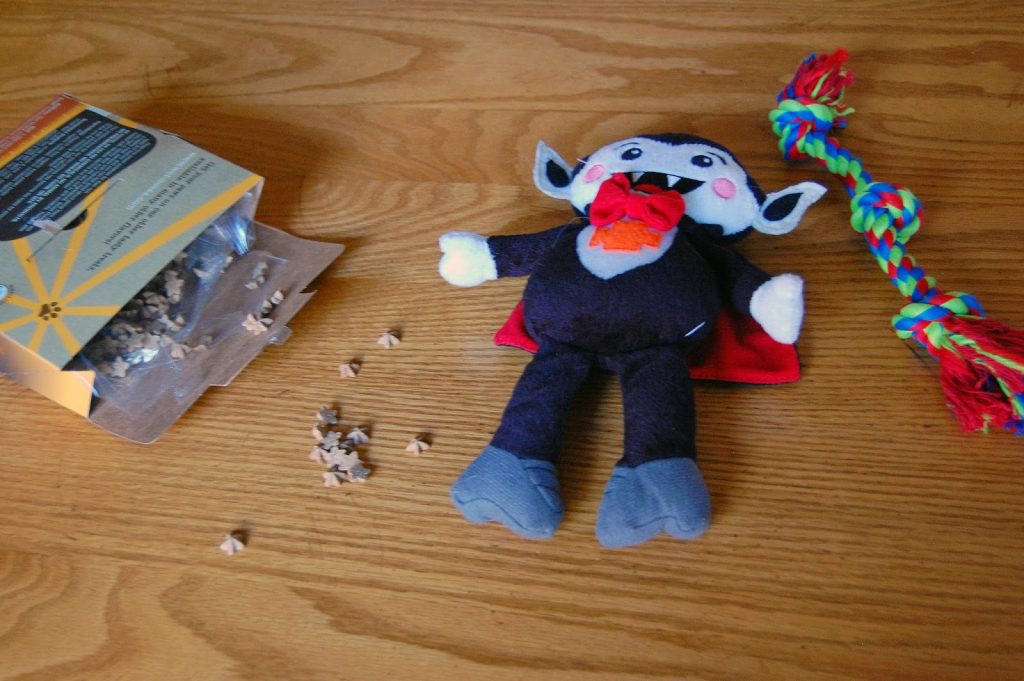 Hello, everyone! It’s day two of Dogiversary Week and today I thought I’d share two of my usual end-of-the-month posts, but make them dog-themed.

WHAT I’M LITTLE ONE IS LOVING

If I were to do my usual What I’m Loving post, where I talk about the make-up that I’ve worn and other things that I’ve loved throughout the month, it would pretty much be a duplicate of last month’s post, so today I thought I’d talk about things that I love for my pup.

Little One isn’t really into toys, but that doesn’t stop me from buying them! I have a bin filled with toys and every once in awhile she pokes her nose through it. Most often, she’ll use her toys as a pillow, but every once in awhile I find her chewing one. Her favorite toy (a stingray) has been slightly destroyed. This time of year, I pull out her little Dracula, which I had to buy last year during fall when all of the Halloween toys were released. Little One’s real name is Mina and I named her after the character from Dracula (I wanted a bookish name for her), so I love it when Mina gets to play with it. Another toy that I always like to have on hand is a rope toy. The only time that Little One and her BFF-who-doesn’t-know-it-yet Wolf actually play together is when they’re playing tug-of-war so rope toys go a long way for that. Last year Target had a spider that the two of them spent a lot of time playing with and I heard that they had the spiders the year before too, so I’m planning to make a trip this fall to see if they have them again. If they do, I’ll probably get a couple because that toy is long gone. I also like to have a couple of Nylabones in the house. The vet usually says that Little One’s teeth look good and I think it’s in large part due to her bone chewing. She doesn’t spend a lot of time with bones, but they’re probably the toy that she plays with the most. And it’s important for Little One to have clean teeth because plaque can lead to heart disease and that’s a problem with Cavs.

The other day I realized that for the last month or so I have really slacked off on working with Little One on training. I’ve been keeping steady with cutting down on her barking, but we haven’t worked on tricks for awhile and that’s the fun stuff! In October I’d like to spend more time working with her on tricks to see what we can accomplish. I don’t want to set a time goal for training sessions because I’ve found that it works best if I base how long we spend working on tricks on how well she’s responding that day. Instead, I’ll make a goal of working with her for five days each week. I’m really looking forward to it!

What are your favorite dog (or other animal) related items? Do you have any goals for your pet this month?