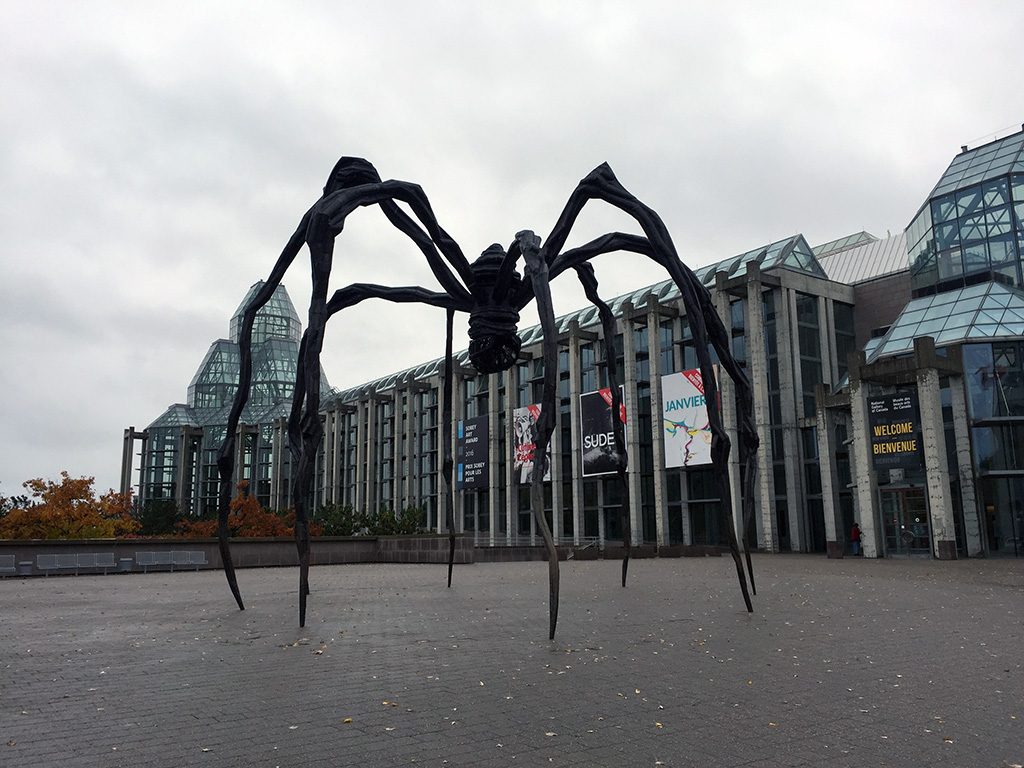 I only spent two full days in Ottawa last fall, but it was enough to capture my heart. I didn’t get to see all that the city has to offer, but I really enjoyed what I saw and it gave me a new appreciation for and understanding of the city. I’ll share my two-day itinerary in my next post about Ottawa–it was perfect if you only have a short amount of time. Today I’m sharing a roundup of all the places I visited while I was there.

The Rideau Canal was built as a military precaution in case of a war with the United States. It was never used for that purpose, but today it’s used for pleasure boating during the warmer months. During winter it becomes a large skating rink and, apparently, you can see business people skating to work. How cool would that be? It’s also incredibly beautiful and looks like a great place to go for a walk or a run.

This is a small museum along the Rideau Canal. It looks like a little house and is the cutest building! The Bytown Museum shares the history of Ottawa–which used to be called Bytown. Be sure to check the hours before you go, because it changes seasonally. It cost about $7 to get in and was well worth it. The museum covers the history, why the name changed and what life was like. When I visited they also had a special exhibit on the fire in Parliament Hill, but it closed two days after I left. I’m sad it wasn’t a permanent exhibit, because I thought it complimented the tour of Parliament Hill so well!

The Byward Market has stalls to buy produce and plenty of restaurants. I dipped into one of the restaurants for a quick lunch one day while I was there. If you want to take a longer break for lunch, there are some nicer restaurants you can sit down at, too. While you’re there, be sure to grab a Beavertail. It’s basically a flattened donut that looks like a beaver tail and they have different options for toppings. The Beavertail is big and rich–I had no hope of finishing it! But I enjoyed it and it’s something I read about before I visited.

The Ottawa Walking Tour takes about 2 to 2 1/2 hours, costs $15 and is so worth it! You’ll go out rain or shine (we went out in the rain), but I learned so much about the city and how it was developed. Some highlights: seeing the Prime Minister’s office and learning more about how the Canadian government works, and learning about the architecture in the city. The tour starts across the street from Parliament Hill and ends in Byward Market.

The Haunted Walk of Ottawa has a variety of tours you can go on and I want to go on all of them! The one I chose was the Original Haunted Walk of Ottawa, which only takes place from April to November. It actually covered a lot of the same terrain that the Ottawa Walking Tour covered, but added a different perspective to it since they share the “spooky” and mysterious stories. It wasn’t a scary walk at all, but it was a lot of fun! You’re led by a guide who wears a black cloak and carries a lantern. The walk starts outside of their office and ends with a tour of the jail. It was about $20, but again, it was so worth it! Would I recommend doing both of these walking tours if you have a chance? Yes!

The Valiants Memorial is a series of statues and busts that commemorate key figures from Canada’s military history. I was so excited to see a couple of women in the mix too! The memorial is located near Parliament Hill and the entrance to the Rideau Canal. I found this as I walked around on my first day after a tour of Parliament Hill.

The Peacekeeping Monument commemorates Canada’s role in international peacekeeping and the soldiers–living and dead–who have participated in the effort. I stumbled upon this one as I walked from the Byward Market to Notre Dame. It sits near the National Gallery of Canada.

The Famous Five are on Parliament Hill grounds, but I saw them on the walking tour. These are the women who were part of the “Persons” case, in which they asked the question, “Does the definition of persons include female persons?” This led to the ability for women to be appointed to senate.

Maman isn’t a memorial or monument, but you’ll find this sculpture as you walk around the city. I wrote “See Spider Sculpture” on my itinerary and I knew I wouldn’t get on a plane without seeing it. This is a sculpture by Louise Bourgeois, created as an ode to her mother who was a weaver. If you visit, make sure you walk under it to look at the sac of marble eggs. The statue sits right outside the National Gallery of Canada and across the street from Notre Dame.

If you’re wondering, “What about Parliament Hill?” I have a full post on the tour of Parliament Hill, which is another must-do activity to put on your itinerary.

Have you visited Ottawa? What were some of your favorite sights?

If you missed the previous posts on Ottawa (or just want to reread):   Solo Travel  |  First Impressions  |  Parliament Hill

[Tweet “Only have two days in Ottawa? Here’s what you have to see and do! #ottawa #travelblogger”]