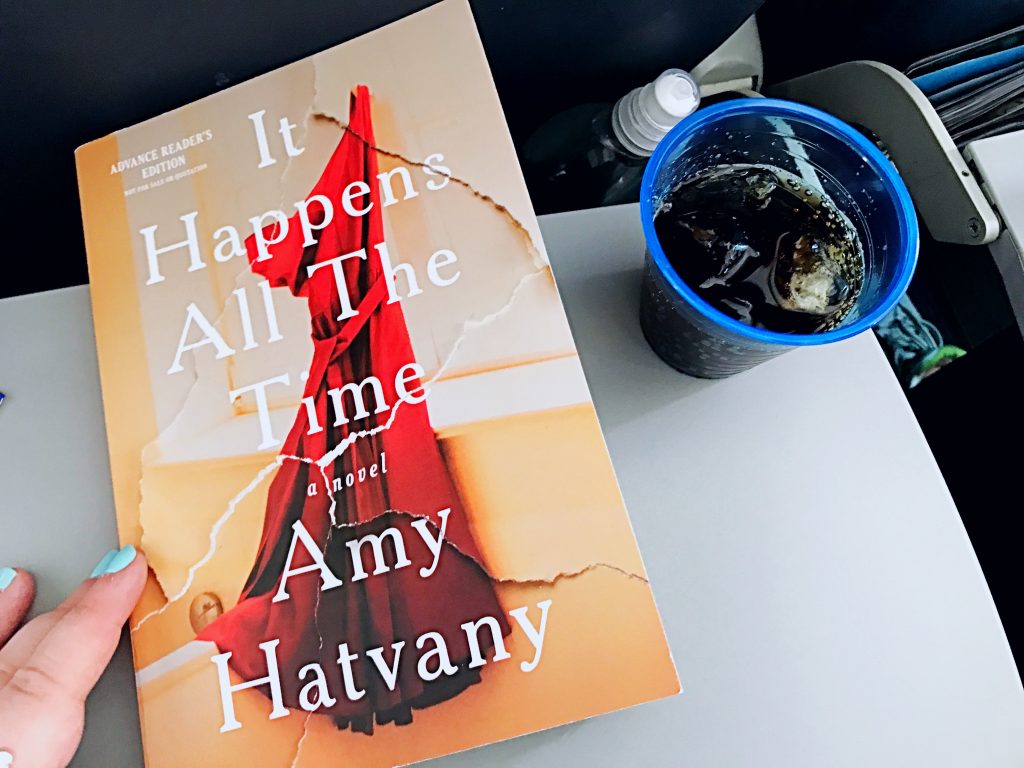 Note – I received a copy of the book from the publisher in exchange for an honest review. All thoughts and opinions are my own.

I have a book by Amy Hatvany sitting on my bookshelf and it regularly comes to mind as a book I should read. I don’t know why I haven’t read it yet; I’ve had it for at least a year. So when I was asked if I’d like to read Hatvany’s newest book, I jumped at the chance. Not only am I already interested in the author, this book sounds like one that needs to be read.

From master storyteller Amy Hatvany—whose writing has been hailed as “gripping and emotionally honest” (Stephanie Evanovich, New York Times bestselling author)—comes a provocative and compelling novel about two friends whose lives are changed by a drunken kiss.

I want to rewind the clock, take back the night when the world shattered. I want to erase everything that went wrong.

Amber Bryant and Tyler Hicks have been best friends since they were teenagers—trusting and depending on each other through some of the darkest periods of their young lives. And while Amber has always felt that their relationship is strictly platonic, Tyler has long harbored the secret desire that they might one day become more than friends.

Returning home for the summer after her college graduation, Amber begins spending more time with Tyler than she has in years. Despite the fact that Amber is engaged to her college sweetheart, a flirtation begins to grow between them. One night, fueled by alcohol and concerns about whether she’s getting married too young, Amber kisses Tyler.

What happens next will change them forever.

In alternating points of view, It Happens All the Time examines the complexity of sexual dynamics between men and women and offers an incisive exploration of gender roles, expectations, and the ever-timely issue of consent.

Popsugar reviewed this as “a breathtaking ode to the issue of consent” and when I read that review after I finished the novel I knew it was the perfect way to describe it.

The ARC opens with a letter from Hatvany about why she wrote this book. I’m not sure if it’s included in the finished copy–I’d run to the bookstore to check, but I read this on the plane to Colombia and I’ll still be out of the country when the review goes up. (I didn’t see it in the sample pages on Amazon, but there was a note saying some pages may have been omitted.) In her letter, Hatvany said she wants this book to start a conversation about consent and the way we discuss it.

I think she achieved her goal and I hope this book can be used to open up conversations about consent. (I also think it can be used to start other important conversations as well.) I’d love to talk to someone who has read it, so that we can talk specifics from the book, but Hatvany used this novel to illustrate both what consent is and what it isn’t in various ways. She wrote characters who were so believable that it broke my heart at times. Even with Tyler. I didn’t particularly care for him, but there were times even he broke my heart as I read his story and I didn’t anticipate that going into it.

And Amber… I think a lot of people will be able to identify with Amber in different ways and pinpoint various moments in their life and feelings they’ve had that they see in Amber, even if they haven’t had the same experiences she’s had. I know I did.

Keep in mind, this book is about rape and the aftermath. It is so hard to read at times. It also deals heavily with eating disorders. I don’t want this to discourage anyone from reading the book, but I think it’s worth knowing when you go into it.

I anticipate this book will be on my list of favorites from the year, not because it was a fun and happy read (it wasn’t), but because it’s important and worthwhile.

So, 3 Reasons You Should Read It Happens All the Time:

1 // It opens up a conversation regarding consent. That was her goal, and as I stated earlier, I think she achieves it. This book talks about what consent is AND what it isn’t, which is an important part of the discussion. No means no, but the absence of no doesn’t mean yes. A kiss and flirtation does not mean someone wants to have sex. As a female, I’ve been told what I need to do to protect myself when I’m out in public and when I’m with other people, but how often do we talk to males about what consent is and isn’t? I’m sure there are people that do–and maybe it’s more of a widespread discussion than I realize. I truly don’t know, but it’s something worth discussing.

2 // It opens up a conversation about how we speak in general and it takes a look at how our words can impact others. I’ve talked about how our words have power and in that post I tried to focus on the positives of that power, but it’s worth considering the things we say that don’t appear to be harmful on the surface, words that have the potential to impact others in ways that we don’t intend, and in ways they might not even realize. How are we talking about our bodies or the people around us? Are we making jokes that can get caught in someone’s psyche? I’m not saying that we can’t have fun and joke around. And I’m definitely not excusing someone’s actions based on things they’ve heard others say–we all know right from wrong and we all make our own decisions. But we need to recognize that our words do have power and we need to speak responsibly. Are the comments we’re making useful or are they adding to stereotypes?

3 // It opens up a conversation about looking for help when we need it. There is such a stigma about therapy and there shouldn’t be. If our children need someone to help them process things they’ve seen or heard, we don’t seek that help, because what will people say? If we need someone to help process our anxiety or depression or any number of things we might be dealing with, we don’t seek that help, because it means we’re weak and/or what will people say? Instead, we turn to other things: food, booze, exercise, sex… And none of that is productive, because it doesn’t deal with the root issue. We need to be okay with looking for help when we need it so that we can deal with what’s behind the problems that we have.

I’m sure there are other conversations that could result from reading this book and if you’ve read it, I’d love to chat so that we can go into detail as we discuss the book.

Have you read It Happens All the Time or would you like to read it? Have you read other books by Amy Hatvany? What should I read next?

[Tweet “Three reasons you should read IT HAPPENS ALL THE TIME by Amy Hatvany. #amreading #bookblogger”]